This congregation came into being as a result of an evangelistic meeting held in July 1923.  Clayton C. Root was the evangelist.  The meeting was financed by the Clark Fund of Cincinnati, Ohio - a foundation to help start new congregations.  The money from this fund were under the oversight of the Christian Restoration Association.

Sunday, October 14, 1923 was the day.  After morning services and a basket picnic on the lawn, evangelist John LeGrande called for Charter Members.  Thirty-six responded. The first building, erected at Cypress and First Avenues, was an old tabernacle type of building.  In 1934, it was moved to the back of the lot and a chapel was built.  It housed the congregation until the move to 1400 Fullerton Road in the spring of 1973.

On July 31, 1934, President James G. Hurst of Pacific Bible Seminary (now Pacific Christian College), dedicated this new chapel using an address composed by Isaac Erret.  David M. Sayers was the minister. During the ministry of Percy Krewson (1947-1953) a parsonage was added.  In March 1957, during the ministry of Dan Burris, a classroom building was dedicated.  During his ministry of 1957 - 1963, Hugh Brown helped to initiate the plan to build at a new location. It was during the ministry of Richard C. Wilson (1 963 - 1973) that the present buildings were erected.  They were dedicated in the spring of 1973.  Galen E. Skinner began his ministry in July of that year. 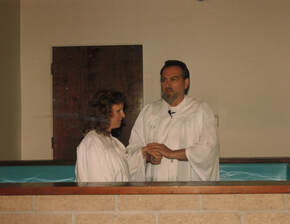 In 1990, Sherman S. Pemberton was called as an interim to re-focus the church on mission and purpose. By 1991 he was asked to stay permanently. He was joined by Dennis Laing (youth), Debra Anderson (secretary), Bob Brown (Associate), Greg Gunderson (Children) and Travis Sheets (Worship). The addition of a Multi-purpose building was made following the destruction by fire of the education building in 1993. An Infant Toddler Learning Center was added in 1998 which Children Pastor Randy Lee Atanay has led from 2004 to 2020, with Tammy Singdale as Assistant Director. Mark Pemberton was Youth Pastor from 2014 to 2017. They were joined by Associate Pastor Ernie Phillips, Youth Pastor John Fouts, and Worship Pastor Curtis Jessup.